December 22, 2009
I Lied
Well, not intentionally... I miscalculated.  I thought my cute pink shoes were coming today but they are actually scheduled to arrive tomorrow.  I'm waiting, Mr. UPS... get your brown-clad fanny to my house!

My iPod has a Sense of Humor
Seriously.  Sometimes I think it has a mind of its own.  For example, it had been raining early this morning.  When I started out on my run, however, the sun was shining between the scattered clouds.  The first song that popped up on my iPod was "Walking on the Sun" by Smash Mouth.

A few songs later, the sun was still holding its own when Led Zeppelin's "Fool in the Rain" came on.  I thought to myself, "Well, I might be a fool but at least it's not in the rain.  Yet."  Two songs later, Miley Cyrus' song, "The Climb" came on... just as I was making my way up a hill.

Guess what happened not long after "Who'll Stop the Rain?" by CCR came on.  Yep!  It started raining!   I was beginning to wonder if I should consult my iPod for the winning lotto numbers.

The next song up was "Crash into Me" by Dave Matthews.  At this point, I decided it might be in my best interest to run on the sidewalk rather than on the street.  I was wearing my Road ID bracelet but I sure didn't want to have to make use of it!

The next- and final- song was KT Tunstill's "Black Horse and a Cherry Tree".  I was walking up my driveway when this one came on.  I turned it off.  I have always wondered about those lyrics... and didn't want to find out what they mean first-hand.

Wardrobe Malfunction
I recently purchased a RunningSkirts Capri Running Skirt for cool morning runs, like today's run. I love it!  The only thing is, when I tried it on at their warehouse, I was in a hurry and had my four year old with me.  As a result, I didn't get to spend much time really evaluating the fit.  I think I should have gotten the size smaller than the one I picked.  When I run in it, it feels like it is going to slip off my hips and drop to my ankles.  I spent the first half of my run pulling them up and finally folding the top over at the waist... which seemed to help.  I hate having to fiddle with my clothes when I run!!  I'm hoping they will fit better if I wear underwear with them.

Sorry.  Is that too much information?

Ch-Ch-Ch-Chi-a!
As promised, here is the topic I'd like to discuss for this post.  Chi Running.  Have you tried it?  Have you even heard of it?   Do you know anyone who follows this running method?

If you have answered "yes" to any of the above questions, I'd like to know what you think.

I ordered a book off of Amazon.com but I won't get it until after Christmas.  I'm interested in this running method because it supposedly reduces injuries and increases speed.  Running form, foot strike, and thinking seem to be important aspects in Chi Running training.

I have never really learned how I'm supposed to carry myself and plant my feet as I run.  I just figured running is running, and whatever works is the best.  Based on my injuries and excessive slowness, what I'm doing is not working for me.  Will Chi Running be the answer?  I don't know yet.  But I'm willing to try!
chi running Dave Matthews iPod Led Zeppelin pink Running Skirts undies UPS guy

Bethany + Ryan said…
or you could wear underwear over the capri but under the skirt, that would hold them up! That is such a CUTE capri/skirt! i have never seen one before, or maybe i have but i didn't know they were connected! It looks fun!
December 23, 2009 at 4:37 AM

Running Diva Mom said…
I love running skirts as well, but also wonder if I purchase them "too big" as they tend to feel like they're falling off and I'm going to reveal myself to the whole world.

Too freaky about your ipod play list -- I would have totally been freaking out. At least it entertained you during your run!!!
December 23, 2009 at 5:44 AM

Anne said…
That's one smart iPod! I've been a follower of Chi running for awhile now, though retraining your body does take time. If you find you need more in-person instruction after receiving the book, there's a guy who does Chi workshops - in Mission Bay, I believe - to bring the lessons into focus. If done properly, you should notice an immediate difference.
December 23, 2009 at 6:32 AM

Jen Feeny said…
Oooh I love that running skirt/capri combo! I struggle with sizes on bottoms too... they never fit! Ugh!

Mel -Tall Mom on the Run said…
I am seriously cracking up...but the same thing has happened to me. I was running about to cross an intersection with low visability and totally zoned out. I forget which song came on but the lyrics were to the tune of "Look up and find your way" or something like that, I can't think of it now.. BAsically the words made to stop and look.. and I realized that I was about to be smashed by an oncoming truck.. Amazing Ipod!!
December 23, 2009 at 10:45 AM

Shellyrm ~ just a country runner said…
Maybe you have a new generation iPod that can think and organize the songs for you? Technology is getting sooo advanced. heeheehee

Love the running skirt/capris. Losing them, not so much.

Janice {Run Far} said…
Oh my heck. my friend was telling me that her friend (who lives in another state) runs this way. I want to know more. Let me know what you find out.
December 23, 2009 at 1:25 PM

Mel-2nd Chances said…
funny about your ipod... mine's done that too. Started downpouring in my 30k race last year, Steal My Sunshine started playing.. JoyRuN has been trying the ChiRunning I think... good luck with it! I have been trying a more forefoot/midfoot strike, hoping for less injuries too!! Here's to hoping!
December 23, 2009 at 3:57 PM

Felice Devine said…
I've heard good things about ChiRunning -- was going to say the same thing as Mel, that JoyRuN's been following it.

Southbaygirl said…
i haver a pair of under armor capris that do the same thing-I swear I'm going to be mooning people as i run-but other than constantly pulling them up-I love them!

Unknown said…
I'm sure the girls will exchange your running skirt, they are so kind and generous! One time I had a certain "issue" at a race and they gave me a free skirt! So sweet, I'd try exchanging it!
My husband and I love Chi running. An ultra-runner friend recommended it for trail running and it really changed my form, relaxed my stride and I DID get faster! It really has some neat visualization ideas for your body and it works!! We also went to a free class at the Long Beach Expo and that helped a lot too. I would definitely read it and then test it out. It helps to have someone check out your form too(while you're brain/body is making the changes).
It does feel different at first but hang in there!
December 23, 2009 at 8:43 PM

Glenn Jones said…
Chi Running is on my list. I've adopted a few of the tenets of Chi running (midfoot landing, etc.) and have seen a tremendous speedup over the past few weeks. I'm looking forward to getting the book and putting more into practice. Now if I can just set blogging aside for a while....
December 23, 2009 at 9:49 PM

TMB @ RACING WITH BABES said…
I love running skirts too! I have 13 of them. They have a great return policy and will take back or exchange pretty much anything within the first 30 days. Contact them, I'm sure they would work with you!
December 24, 2009 at 6:23 AM

Popular posts from this blog 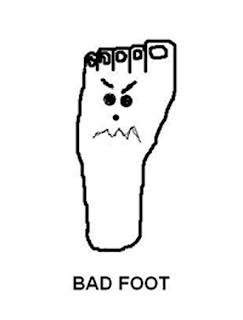 I have decided to see a podiatrist.  I don't want to... but I think it's time.  My foot actually feels worse the past few days and I haven't been running in over a week.   San Diego bloggers, do you have any recommendations?   If you know someone good, maybe I'll get lucky and the name will be on my insurance's pre-approved list. I made it to the gym tonight, after about a week of no exercise & eating poorly.  It felt great to go work out my muscles.  It also felt great to put good, healthy food into my body today.  I'm going to get back on track with my diet.  I went grocery shopping and got lots of organic fruits and veggies.  Yay! Well, that's all!  Short, little post... just like the title says. Have a wonderful day & take care!
Read more

My Apologies to Miley Cyrus

There's GOT to be a Better Way-- Part II 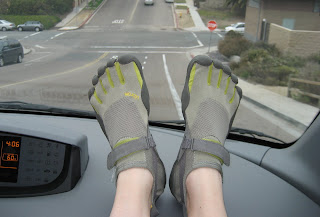 Note: If you haven't read Part I of this, you might want to go back one post.  Here, I'll even save you the trouble of having to click around too much to get there.  Just click here:  Part I  I left off on my last post explaining what I had been learning about running barefoot as opposed to running with shoes.  I tried to leave you guessing regarding what I was going to do with the information... but I'm sure you've figured it out.  And if we're Facebook friends, you probably already know. Making Contact The more I read about barefoot running, the more I just wanted to get out there and try it.  I have always enjoyed being barefoot and I love to feel the ground under my feet (unless I'm in my boys' bathroom... then I pretty much have to put on some of those biohazard footies prior to entry). So the other day, I was a good cross-trainer and went on a bike ride.  After that, I decided to go on very short, one-mile run.  I headed out with the intenti
Read more

Rookie on the Run
Two amazing little boys call me Mommy. A very patient man is brave enough to call me his wife. A merciful God is unashamed to call me His child. Those are the most important titles I hold in life. I hold many lesser titles. The newest and most unexpected is "runner". God willing, I plan to keep that title for nearly as long as I keep the others.